Endemol, the production team of the hugely successful Tele reality show "Big Boss' is likely to be made in Kannada also. Already there is strong buzz in television circles that Bigg Boss will soon head south.
The production team, Endemol, will take a break after the current season and start working on a new format for audiences down south.
The show will be made in two languages, one of which may be Kannada. Celebrities from the different southern film industries will be cast on the show. A new host will also be cast.
The sets will remain at its current shooting location – Lonavala. but will have a few changes in it.
It is likely to take off in March.
Last edited by a moderator: Oct 10, 2015
A

I followed this show when Vindoo dara singh won the title...it's nice show if you have interesting characters inside the house...but sometimes seems like it's scripted
K

I feel most of these reality shows are scripted
D

yes some times it feels like scripted.. but its fun..
Rahul mahajan season was the best...
K

I used to see when sunny leone n veena malik where there
:grin:

Staff member
Good programme if it is not too much scripted..
People should be in invited from all different groups
K

resently when show started i was watching but i have stoped bcoz its boring :malin2:
R

You need to watch few episodes to get used to the characters and format, you may like it then. I loved dara singh so much i even voted for him 3-4 times :mrgreen:
V

In south it is very difficult to get this of reality show on and be successful. Akul's shows were hardly successful. People might watch it for curiosity but then the interest will surely fade down. Participants can be Renkuacharya, Nithyananda, Kali swamy, Sai Prakash, Sri nagar Kitty, Shoba madam, Ibrahim, Dayanand, Akul will also participate

Suvarna dalla barodu.. They will be hogging like anything for these type of shows..
A


Finally the cat is out of the bag. Kiccha Sudeep will be hosting the Big Boss Reality show in Kannada. The producers of this serial is yet to take a decision whether their foray is to be in Kannada first and then spread to other languages. But if the programme is made in two languages then it has to be seen whether Sudeep would fit in as a host in two languages or in Kannada only.
Sources close to the actor did not want to reveal the remuneration of the Kannada Super Star per episode, but however added that Kiccha has been offered and paid a big salary packet for hosting the programme. It may not be easy to speculate the exact figure. Television industry sources say that Salman Khan is being paid Rs. 4 crores for every episode and since the producers of the Reality show are making their first foray down South, Kiccha may be charging somewhere in the region of Rs. 30 lacs to Rs. 60 lacs. However sources are just candid about the price offer.
Kiccha may go to Lonavala Pune where a special set is created for shooting the episode. The dates of shooting may be finalised only after the conclusion of CCL 2013 competition, sources said.
Meanwhile, Kiccha's Jose Alukas advertisements will start appearing shortly on channels, sources said.
However it is learnt that Kiccha does not want to over expose with signing too many commercials now and may one or two television reality shows depending on the kind of exposure and remuneration that he gets.
However it has to be seen which of the Kannada film actors will be caged for the show and whether artists from other languages will also be included.
K 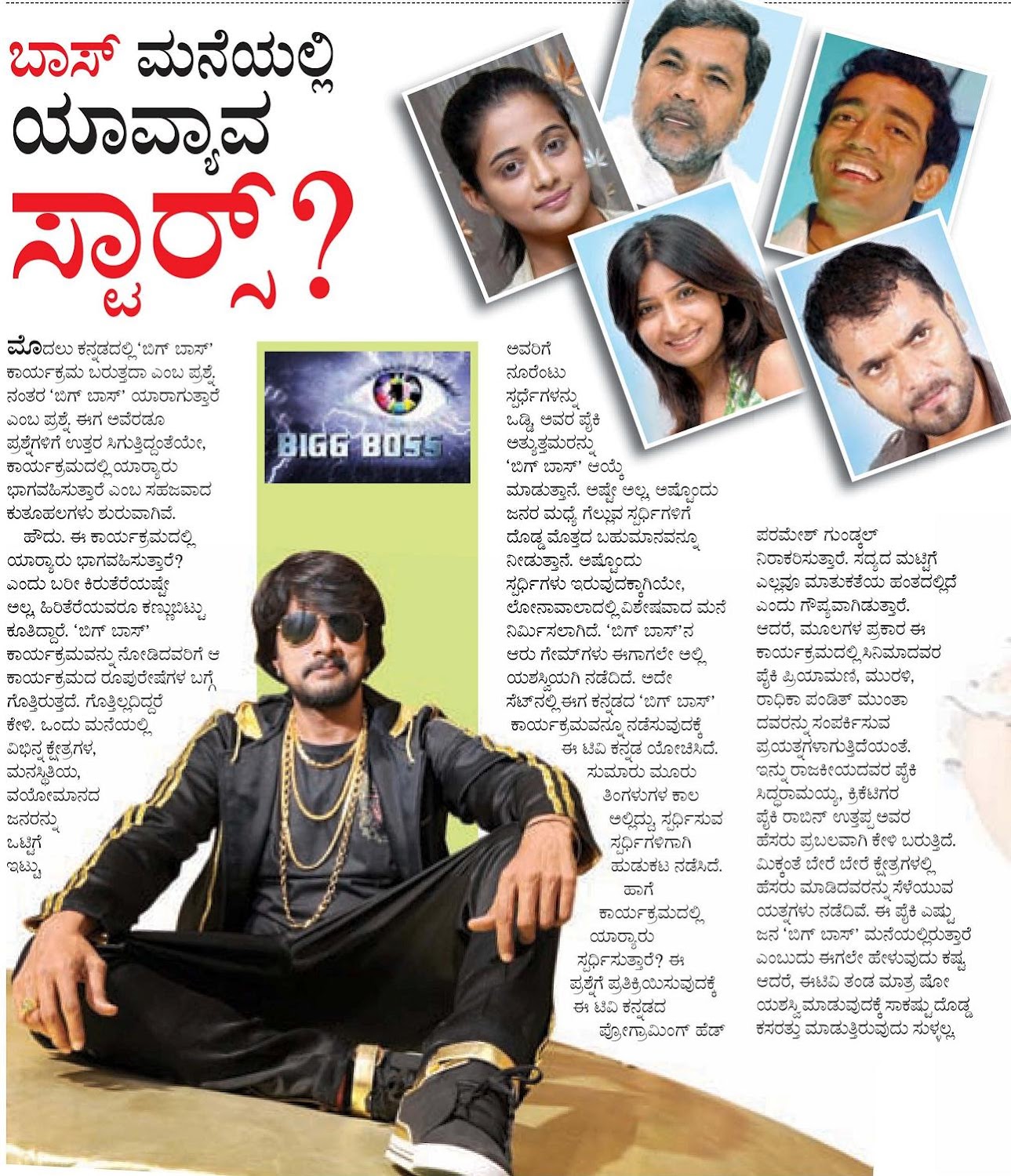